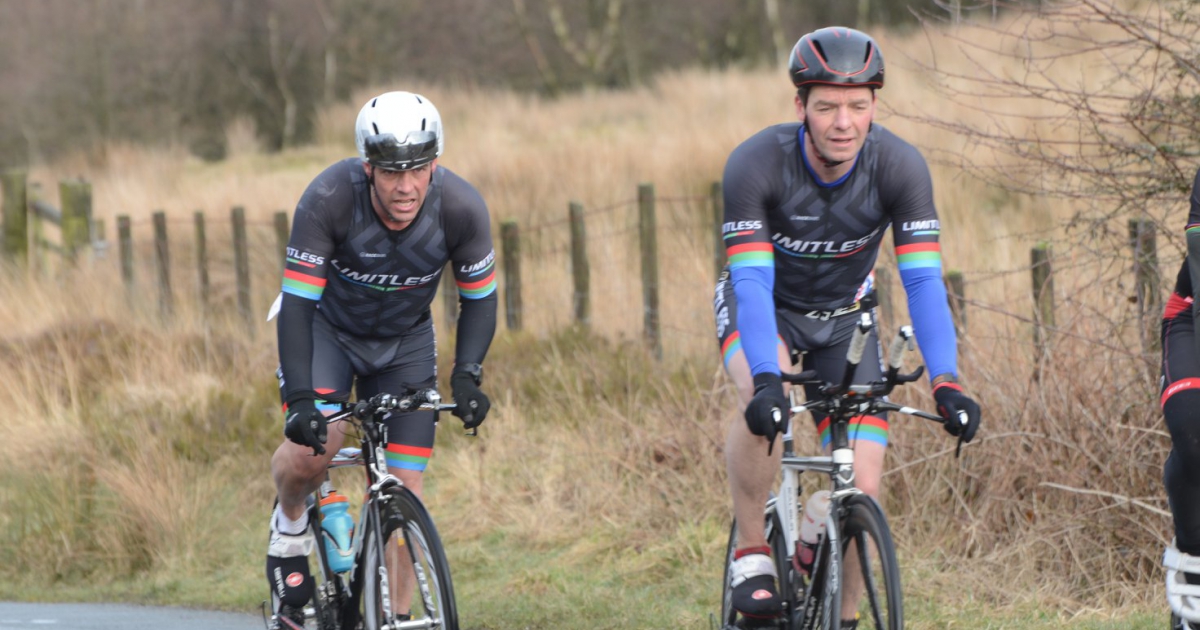 So here we go the first race of the new season, The Epic Events Firefighters 2Up Duathlon

Well there was one thing for certain we couldn't have had better weather, as for the rest of the day well that's a different matter!!!

This was the first outing in the new kit for a few of us, and with everyone, well, almost everyone going well things looked great, young Wes Roberts had become a dad for the second time in the week so was full of it and had that lovely sag in his eyes that only sleepless nights can give you, that said he was raring to go. Martin Howie was there wearing the Limitless Skinsuit with pride and also raring to go. Then there was me and my bestie Andy Turner. I was thinking I need to shed some winter plumage. All the guy skinsuits just say LIMITLESS on the front mine kind of says LLLLLLIIIIIIIIMMMMMMIIIIIITTTTTTLLLLLEEEESSSSS such is the stretch in the material!!

Andy had this extremely disturbing spring in his step and an air of confidence that only real fitness can bring on, you know what I'm talking about we've all been there when training is going well and you feel like you can take on all comers. I on the other hand was shitting myself, thinking about all the other 2Ups we've done together where I have felt like this and Andy has been hanging in. The last couple of years this has changed and Andy and I have been pretty equally matched so raced really well together, something was telling me I was in for a pretty torrid couple on hours, guess what, I wasn't disappointed!!

We set of in the second wave 2 minutes behind the first and instantly things were different to other years. Normally Andy paces the first run and I sit in as the so called stronger runner. This works on two levels as I don't run Andy too hard and we have one of us with slightly fresher legs for the first couple of miles on the bike to get us going. Not this year. I found myself hanging on for grim death to Andy, battling not to slow us down. Andy is the ultimate team player and soon recognised he was going to be baby sitting me for the run. Speaking of babies, young Wes was bombing along, scooting up the hill like a gazelle, never to be seem again! The rest of the run up the hill was all pretty uneventful Andy chatted away while I aged a couple of years with a heart rate of about 400BPM!! Then to my fave part of the 2Up the run down hill. This can only be described as sketchy. I was reduced to a practical walk, when Marc Laithwaite and his partner in the mixed race NKW came past me.

I simple couldn't be arsed coming back with a witty comment. So into T1 in a time of 27:18

Now last year on the bike I got about a mile in when my pedal parted company with the crank. Sadly this didn't happen this year so I found myself staring at Andy's backside for over an hour, now as nice as Andy's bum is that's not really the essence or riding as a team, you share the work load to keep the pace as high as possible without either of you blowing up. I put a whole new slant on this for this race. When I could actually get past Andy my cunning plan was to give myself a bit of a rest as the pace would drop. Of course Andy takes a look at the power meter and comes hurtling past saying "don't worry pal I'm OK I can stay on the front". "Brilliant mate cheers". I was really thinking bollocks! All the while we are in a right old tear up with Mr Laithwaite and NKW so as you can imagine I was having an EPIC time!

Now you've got to understand that Epic Events have some ace races but they are generally pretty challenging, this is no different. The sting in the tail on the bike leg of this race is the climbing, Sheephouse and Anglezarke are tough. I'd use a more graphic description of Anglezarke but I've had a couple of days to reflect. If you look at the pictures on this blog that should tell you all you need to know, Andy flew up it and limped up it. I have to say the only thing that really kept me going was the fact that Marc and NKW were still in sight so we had someone to chase. We got to the top and then it happened. Mr Laithwaite pulled over and started to lay his scent, and not for the first time during the race according to Marc. I can see it now, Chorley fell runners and walkers wondering what the strange smell is on the Anglezarke fells. I personally haven't slept for days!! Off the bike in a time of 1:13:27 not our best by a long way

We now got to repeat the run course with our shadows for the day Marc and NKW, oh the joy. Andy was jogging and I was dying, I started the race aged 47 and finished aged 50, which isn't all bad cos I've now aged up at Ironman so don't need to be beaten up by Nick Rose, Marc Laithwaite and Tony Cullen for a couple of years!! I can honestly say I can't remember a lot about the second run except for talking to Dan Knight about how knackered we both were and how our partners looked nice and fresh. I ran a bit better on the downhill mainly because I knew that Marc and NKW were right behind us. We got to the finish line in a time of 2:10:34 far from our best mainly due to me. I'm sure Andy would have been a lot better on his own, however if I'd have been alone I think I'd still be on the course some where!

Some hello's and well dones as always. Well done to the ever impressive Cullen brothers on a fantastic performance again!! Craig Hamilton and Ian Sim and Graham Rands and Adan Norfolk on first and second in the Fire Service race. A real special well done to Julian Goudge on finishing 4th overall on his own!!! and to young Wes who finished 12th overall again on his own beating me and Andy, Marc and NKW won the mixed race again well done guys. Finally thank you to all the Limitless guys who raced and came out to support again doing us proud, and a special mention to the nicest couple in Triathlon, Lee and Carol Spoor, thanks for the support and I'm glad you like the kit xx

As for me and Andy we were 16th overall and third in the Fire Service race, so not a complete disaster. As always it was great to catch up with friends and again it simply confirms everything I love about the sport.

Next stop Oulton Park Duathlon for another kicking of Mr Turner

Till then take it easy