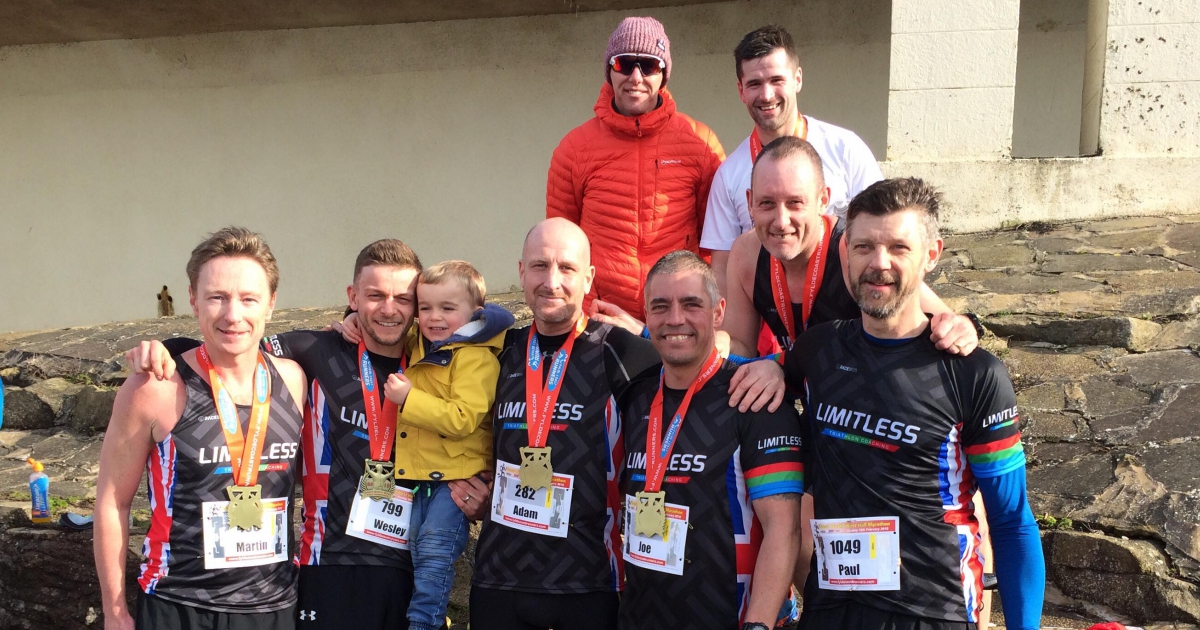 It’s race day, my first road race in 4 years, and this can only mean one thing….there is a calamity waiting to happen just around the corner.  My last two races have seen me end up in hospital...what could possibly go wrong today?

The day seemed to start quite nervously as I picked up Joe Duckworth, Paul Dotchin and Stephen Cox. I soon realised it wasn’t so much pre-race nerves from them but more a case of….”oh shit, Adam’s driving…will we even get to Blackpool!!!”. I am pleased to report there were no major catastrophe’s on the drive down and we arrived in plenty of time as we parked up at the Hilton Hotel in Blackpool.

The only mild panic I had halfway to Blackpool was the race numbers, did we remember to bring them? All sorted, coach Duckworth had them in his bag…phew!!!

The weather was perfect for running, a nice clear, cold crisp day with hardly any wind. This is probably as good as it gets on the sea front in Blackpool so the early signs were looking good.

The hotel opened its doors to all the competitors which was great for keeping warm and comfortable before the race and more importantly…no queuing for portaloos.

The usual banter started from the lads as soon as I pulled my trainers out of my bag. They were a brand new pair of Adidas Adizero Adios 3 in bright orange. Joe was first to point them out, “They’re women’s shoes”,

I must have looked horrified and my response wasn’t too convincing “No they’re not, they’re men’s”.

“Erm”…I had to check the label because I was doubting myself by now. Phew…”there you go it’s says male”

“She-male”, chuckled Joe. I still had to double check again just to be sure.

Next up was my Injinji socks, which young Wes pointed out. “They’ve got six toes” and queue more laughter from the group. All this banter is great for relaxing nerves before a race and really cements the solid team spirit we have in the Limitless Triathlon Family.

The race went off without any major problems. I was nervous beforehand because it was 4 years since I had last run a road race. I had also been running just twice a week because I really want to improve my bike strength this year. Joe has always told me not to worry about my run and the bike strength work will help on the run. He was right, I felt strong today!!!   Joe, Wes and I set off together and ran the first few miles together in a nice controlled pace. I felt strong in the legs and aimed to tap out each mile consistently. There were plenty of runners that had gone out too fast and it was good to pick them off throughout the run. The last few miles were tough with a building headwind and a lot of back runners blocking the run route, however I tried to make sure I finished strong and caught a few more runners in the last half mile. I was delighted to cross the line in 1:22:01, I really wasn’t expecting to be running this quick off two runs per week and so early in the year.

These events are great “training races” as they get a few extra percent out of everyone. It was fantastic to see everyone get PB’s, apart from myself and Joe who’s own brutal training plan had meant he had been battering himself all week on the Wattbike.  The success experienced from everyone today really shows the training programs that Joe and Ian are putting together are working and paying off big time for the team. Well done to all the guys that ran today and great to see everyone get a PB, another brilliant day out.

Great North Western half marathon, the first race of the year. This was the first acid test of the training regime I had been working to for the past few months since starting to train with Limitless Triathlon Coaching. Bedecked in my new Team Limitless kit I took to the start line with the usual pre-race butterflies. Once I was off it felt great to be running, I settled into it and by the end of the first mile I had found my rhythm and was really enjoying it. Half distance came and went and I was still feeling strong and running well. As I turned for the last couple of miles it was into wind and started to feel tough as i began to tighten up. A quick look at my watch and if I just kept going I was on for a good time (for me). I crossed the line still running strong in a time of 1:39:40 …… A PB by ten minutes !! The training so far is paying off, and i'm thinking what else can I achieve ? This is going to be an exciting season.

This was my first stand alone road race, so was interested to see how it would feel compared to run training and it is as the saying goes ‘You push yourself that little bit extra when pinning a number on!' I set out with a plan of running within myself for the first 6 miles and then hopefully feeling good pushing on from there. My plan worked pretty well and on the 6 mile mark was able to give that little bit extra till the finish line, finishing a race strong always adds confidence. I have received some great coaching and training sessions this year from Joe Duckworth and looking forward to the tri season starting.

Training had been going to plan and gains were being made, but I hadn’t done a road half marathon before so all what was about to unfold was new to me...

The sun was beaming down as I gathered in the starting pen with over 1000 other entrants down on the promenade in our new Limitless kit! People have been commenting on how nice it is and I couldn’t agree more- its proper smart! Last minute race prep was being made by Coach and AC (mainly AC counting his toes and lacing his new shemale adizero’s).

I was aiming for around 1:28. AC stated that he was going to be aiming for around then, so I paced myself with him and the mighty JD. The first 7 miles were comfortable at around 6:25’s, but it was very clear that both Coach and Critch were running well and started to pull away from me. I was fine with that as I was supposed to be around 6:45’s anyway, its as well really as at 7 miles we then loop our way back down the prom into a lovely head wind and the route had a couple of little kickers to make things interesting. I was able to keep coach in my sights for the next 2 miles, but as we turned back on the loop for the second time coach pulled away and I couldn’t catch him. I managed a sprint finish and came in at 1:26:38. I was thrilled with my position and  its clear what coach does is working! I averaged 6:36mm

I just hope that I can take this pace into those long runs, which are going to be creeping into my training plan soon.

Finally, I just want to say well done to all the lads that ran today, you were all awesome!

I set out with the plan to run a controlled race. I’d completely red lined at 10k in my last 1/2 marathon back in October so was a little concerned going into the race. I held the pace I’d set and didn’t push any further. After 10k I felt really good and stayed focused on holding the pace for the second half of the race. I managed to produce a PB but more importantly this has given me confidence of further improvements. I am looking forward to the next 1/2 marathon when I will tweak my starting pace up another notch. The specific run training I’ve done since October has increased my ability to run faster for longer.

Really great to be part of the team and the new kit seemed to lift us all. Joanne competed as well. Great well organised event and the sun was even out!

Great North West ½: My first event of the season. Pre event thoughts were new kit looks great, don’t let the team down and can I PB? My training had been mainly road based not treadmill, I had run further in the previous weeks so I was  comfortable at the distance but the times were nothing to write home about.

The race started and typically the pre-race “pace yourself” thoughts went straight out of the window!!! After the previous weeks of cold, wet windy training runs it was somewhat of a shock to get a warm, sunny and clam Blackpool sea front. By mile 4 an on the hoof wardrobe change was called for, vest off, long sleeve skin top off then vest back on, not easy when your sweating like a copper on a maths test. Anyway this was accomplished without too much heartache which brings the next little issue. Due to my abandonment of “pace yourself” I decided to monitor heart rate and for a Garmin Fenix 5X no issue!!! Checked and HR was 177 with a big red down arrow being displayed “gulp” I had never seen my HR above 168. Quick analysis I did not feel too bad and I could speak, Ahh could this be the first tech issue something Joe had talked about in the car. Checked again and again yep screen locked at 177 right crack on, run to feel, all is good Saint John’s not required. From there the run was enjoyed crossing the line and knocking 3 minutes plus of my previous PB. New PB 1:33:34. Post race it great to spend time with the guys the comradery is unbelievable given we really only communicate through FB . Every time we get together I seem to get a boost of enthusiasm which is absolutely fantastic, roll on the rest of the season.

So there you have it the first team outing was a success I think, people getting PB's having a bit of fun and cheering each other on. I have to mention the support on the day from the families and athletes who weren't racing, I have to say having people shouting "c'mon Limitless" on the course was a pretty proud moment for me and really did feel like the start of something special. As for my race I finished in a time of 1:23:45 a minute and a half behind the Critch, which I was more than happy with. My focus so far has been on improving my bike and swim, this has meant the running has taken a bit of a back seat for now with only 1 or 2 runs a week mainly on the treadmill and interval based. This became evident in the last mile, there are some pretty horrendous photos knocking about on Facebook to prove it, a face only a mother could love is the best was to describe it!!

Next races for the team are on the 4th of March at the Haweswater half marathon for me, Adam and Martin and a 28 mile TT For Ricky Dewhurst and Andy Orton, lets hope for more of the same.